RUSH: You watch what's happening in Manhattan last night. You watch what happened in D.C., you watch nobody trying to stop it. It is just mind-boggling. It is literally mind-boggling. These Democrat-run states seem hell-bent on whatever carnage happening, as long as they think they're gonna be able to end up blaming it on Donald Trump.

It's just astounding to watch this, the degree of hatred these people are harboring for one man. Well, actually not just one man. Those of you who voted for him as well. I mean, even the Drive-By Media is out saying they've never seen anything like this. Macy's, Harold Square looted last night. You know, people say, "Rush, this is not as bad, it's been worse than this before, Rush. You've just forgotten. You've forgotten the Watts riots in LA in the sixties." 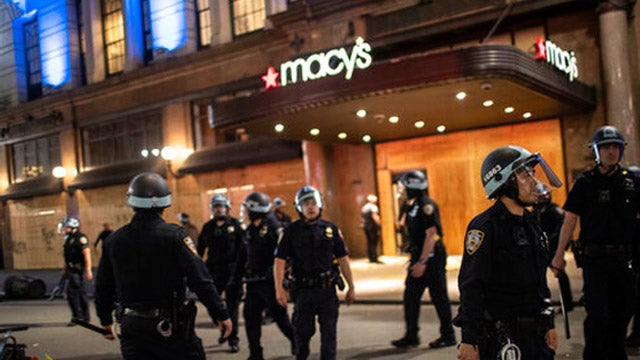 No, I haven't. "And you've forgotten about the protests of 1968, the Democrat national convention in Chicago." No, I haven't. Speaking of that, I want to run something by you. I just got a news story involving Senator Lindsey Graham. It's from the Washington Times.

"Sen. Lindsey Graham on Tuesday questioned how much blame should be directed at Antifa for the violent protests and looting in the wake of George Floyd's death in police custody. Mr. Graham, who chairs the Senate Judiciary Committee, said Antifa has played 'a part' in the civil unrest. But the South Carolina Republican noted that rioting and looting happened during protests long before the militant anti-fascist group became a movement. 'We will try to find out how organized this violence is,' Mr. Graham said. 'But I am old enough to remember 1968, and Antifa was not around in 1968, that I know of.'"

So what? I saw a little expose on Antifa last night, and I kind of enjoyed it because it made a point that I made yesterday. Antifa is a group that is recruited off of college campuses. Antifa is an amalgamation, but it's not just a bunch of poor, disenfranchised either minorities or white people fed up. Many of them are top-tier graduates of American universities who come out of these universities with their minds already poisoned.

They've been radicalized by the professoriate, by the faculty. And many of them come from means, from families of independent means and wealth. They're not all ragtag poverty. But it is a well-oiled machine. Whether they've been around since 1968 doesn't matter. Now, I know what Graham is saying. Graham's saying -- we'd have to speculate here -- because the riots in 1968 were the SDS. That would be Tom Hayden and the boys. I think Antifa is just the modern-day descendants of that. I think these anti-American radical leftists have been around for a long time, whatever they call themselves. 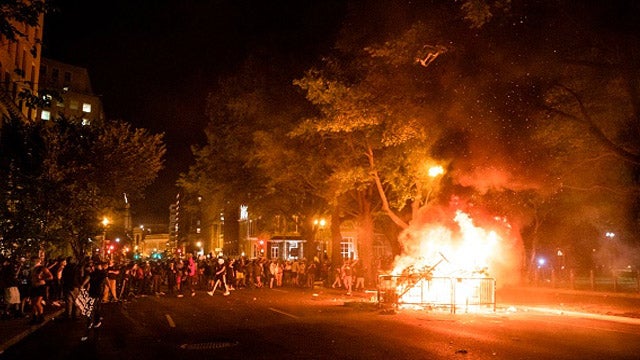 "Rush, that's too simplistic." No, it isn't. Besides that, the most simple explanation is almost always the right explanation, folks. The Democrat Party is getting exactly what they want. This is exactly what they've set the table for. And it doesn't matter which constituent group you're talking about. I've told you they need a permanent underclass that is in constant need, unable to speak the language, unable to provide for themselves. That forms the foundational power base. 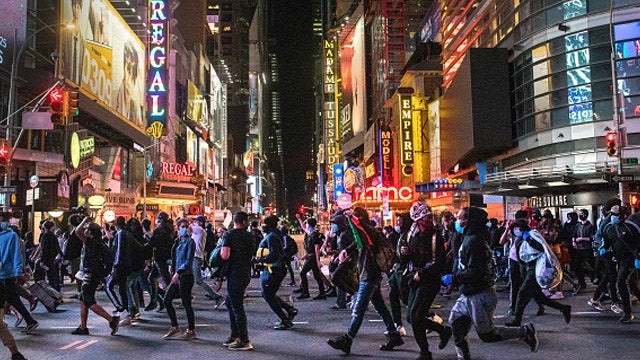 I don't know why he would want to focus people's attention away from Antifa by saying, "Well, they weren't around in 1968, and there were riots in 1968." Senator, it's all the same people. It's all the same organizational energy. It's all a bunch of whatever is most comfortable for you to use -- liberals, socialists, communists, anarchists. Anti-Americans is what this is made of, and they are giving it their best shot.

RUSH: Hey, hey, hey, hey, look at this, folks. It's Democrat versus Democrat in New York. Here is the mayor... Sorry, I get all these Democrats confused. Here's the governor of New York Andrew Cuomo today speaking in Albany.

CUOMO: The NYPD and the mayor did not do their job last night. What happened in New York City was inexcusable.

CUOMO: I offered the National Guard. The mayor has said he can handle it with the NYPD. My option is to displace the mayor of New York City and bring in the 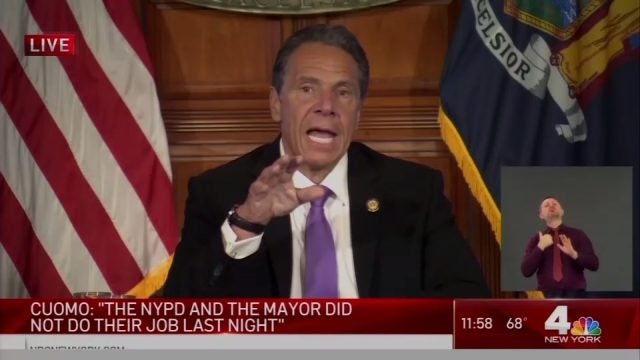 National Guard and basically take over --

CUOMO: I don't think we're at that point.

Just let them have their run at it. That is a predominant way of thinking in minds like Bill de Blasio's. I had some people ask me last night, different people randomly, "Rush, when are the people of this country gonna rise up? When are the people that own these pieces of property gonna show up and go out and stop it? The cops aren't gonna do it, and the National Guard and the military are not gonna be deployed.

"A lot of those people in blue states don't even own guns 'cause they don't believe in 'em. So what are they gonna go out and stand up and revolt against with? They're kind of screwed -- and then talking about the people in those blue states anyway, are they even of a mind to stand up and try to stop it, or do they think it would be offensive at the same time?"